Political Craps by Tom Ufert is an audio book recorded and produced at Double RR Studios and narrated by Sandy Orkin. It is now available at Audible. From the publisher: 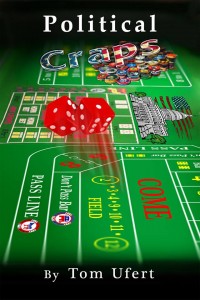 We the people of the United States, in Order to form a more perfect Union, establish Justice, insure domestic tranquillity, provide for the common defence, promote the general Welfare, and secure the Blessings of Liberty to ourselves and our Posterity, do herby vow to actively participate as informed citizens, holding ourselves and our representatives accountable, in the conduct of our nation’s affairs to serve all generations now and in the future. Obamacare. IRS Scandal. NSA and Privacy. BridgeGate… Anthony Weiner. Chris Christie. Tom Ford. Bob Filner… Shutdown vs Meltdown. Gridlock, TeaParty. Rep. vs. Dem… Deficits. Lobbyists. Unemployment. Opinion Polls… They’re all here and it’s all up to you! Enough is enough and the time for action is now. Everyone says they’re fed up with the partisan rancor, inefficient government, and the “blame games.” People cry for leadership and apathetically accept the status quo. In Political Craps. Author Tom Ufert lays it all out as a former political insider and holds both politicians and voters accountable. He reminds us all that with freedom comes responsibility and change takes action. “A Government by the people, for the people.”